Does it really matter?

Does is really matter which church? I believed the Bible and I really wanted to follow Jesus.  But what does that even mean? Do I believe the Bible to the extent I agree with a particular church’s statement of faith, or a particular tradition’s catechism? Does following Jesus boil down to my own subjective interpretation of Scripture? Is this subjective soup really what Jesus intended? He refers to Himself as “the truth”. Is this Protestant free-for-all what He intended? Why after 2,000 years are we always reinventing the wheel?

Who do you say He Is?

Recall Peter’s great confession at Caesarea Philippi, responding to our Lord’s question, “But who do you say that I am?”. Long ago, by God’s grace, I could say with the Great Fisherman: “You are the Messiah, the Son of the living God.” (Mat. 18:16-17*). My journey into the Catholic Church did not involve Who is Jesus per se. Rather, I questioned the church. What is it? The question is not merely an academic exercise. Our Lord identifies the Church with Himself. Jesus did not ask Saul, persecutor of the Church, on the road to Damascus, “Why are you persecuting the Church?” He asked, rather, “Saul, Saul, why are you persecuting me?” (Acts 9:4).

A central tenant in the New Testament is unity in the Body of Christ. I found unity not only lacking in Protestantism, but the very germ of Protestantism prevents unity. That troubles me. I found a rigidity and narrowness that allows no real room for “one body and one Spirit . . . one hope . . . one Lord, one faith, one baptism; one God and Father of all, who is over all and through all and in all.” (Eph. 4:4-6). Unity and humility are linked (See Phil. 2). In our Protestant schemes, I saw no place for unity. Instead of humility and submission to authority, I found something else. Division was not a hidden thing. It is in plain view as to be almost invisible. This drift apart is not limited in time or place. It has been at work since 1517. It seems at fever pitch today. Look in the phone book under “Churches”. Look at all the store-front, pop-up churches with hip new names. Did our Lord, on the night in which He was betrayed, really intend this?

These questions developed in my mind over decades. My questions did not involve doubts about the reliability of Scriptures; or about God’s revelation culminating in the Incarnation, Life, Death and Resurrection of His Son, Jesus Christ. Long ago, as a law student, I began studying the historicity and authenticity of the Scriptures. Rather, I began to see subjectivity inherent in Protestantism. I resolved to know what we really believed, and why we believed it.

In previous posts I picked two issues as points of reference to highlight differences between the traditions, and major departures from historic Christianity:  Baptism and Holy Communion. There are others, many others. Protestant traditions handle these fundamental tenets of the faith so differently. Long ago, I heard a maxim that was supposed to somehow solve these difficulties: “In Essentials Unity, In Non-Essentials Liberty, In All Things Charity”. Then that slogan stopped working.

I could no longer pigeonhole major tenets of our “one faith” into an arbitrary box labeled “non-essentials”. That fictitious box no longer outweighed the reality of the Gospel of John, chapters 14 through 17. Gone were the days when I could turn a blind eye to an ever-growing mountain of evidence. It has been 500 years since Martin Luther’s 95 theses. The evidence is in and the jury has a verdict.  The evidence did not prove, but rather disproved, our Protestant case. By the Spring of 2017, these doubts and questions coalesced into a real fog. I did not know that an amazingly satisfying and objective answer was in store.

Looking back, I should not have been surprised that our Lord would provide an objective, soul-satisfying answer. Recall John the Baptist, about whom the Lord declared, “Amen, I say to you, among those born of women there has been none greater than” he (Mat. 11:11). The Great Baptizer and Preparer of the Way was himself the subject of centuries-old prophecies found in the Book of Isaiah (Is. 40:3; Mat. 3:3). John was that special prophet who bridged the Old and New Covenants. His very birth was surrounded by miracle and mystery. John even baptized our Lord in the Jordan River, having received revelation from God to testify, “Behold, the Lamb of God, who takes away the sin of the world.” (John 1:29-37). Then John found himself in prison, questioning his interpretation of Isaiah’s prophecies. John saw the merciful works of the Messiah, but not the fiery sword of the LORD’s judgment (Is. 66:16). Soon to be beheaded, John needed to see that fiery sword of the Lord. In this light, John’s disciples are sent to ask Jesus, “Are you the one who is to come, or should we look for another?” (Mat. 11:2). John received an objective, satisfying answer. I would too.

I had come to see major problems in the Protestant world. The Spring of 2017 was just months away from what would be the 500th anniversary of the Protestant Reformation. I had almost 50 years of evidence, much collected consciously, most by osmosis. I also had our 500 years of evidence. For most of my 49 years, I had been a student of Sacred Scripture. That mountain of evidence stood against the truth filter of Scripture. I started to see fundamental flaws in the fabric of protest that began in 1517.

Having been born into that subjective soup of denominationalism, it was hard to see. Growing up hearing that Rome was wrong and we were right, denominationalism was just part of the recipe that made Christendom. For years, my bookshelf contained a copy of Handbook of Denominations in the United States. According to the Handbook, in the 1990s there were over 200 denominations in the United States alone. More recently, and globally speaking, I have seen denominational numbers greater than 20,000. Regardless, the lesser figure makes the sad point as well as the greater. Both figures stand frighteningly against “one body”, “one Spirit” and “one Lord”. Having spent most of nearly 50 years as a Baptist, division and schism seemed the genesis for new congregations. There seemed to be no place for humility and authority.

That division in the Body of Christ stood over against unity. Unity is at the heart of Jesus’ prayer in John 17. Unity is a witness so that the world might believe that the Father sent the Son into the world (Jn 17:11 & 20-23). Jesus prays for unity and oneness. Unity is not an afterthought. Unity is evangelistic (“that the world may believe that you sent me”), like a good Baptist wants to be. This was Jesus’ prayer in the upper room, on the night in which He was betrayed.

For 500 years since Martin Luther broke away from the Catholic Church, denominationalism has been an ever-growing mountain of evidence, born of differing interpretations of Scripture and no authority. I found no place for humility; no place for submission to authority. By what authority can a Christian declare Baptism or Holy Communion to be “non-essentials” of the faith? By what authority can we regard unity and humility and submission to authority “non-essentials”? Under the Protestants’ scheme, how can Jesus’ prayer to the Father for unity ever be answered? Five hundred years of evidence from Protestantism says it cannot. But, how is it possible that Jesus’ prayer to the Father go unanswered? Again, it cannot. And so, if unity is fruit from the vine of Christ, and if the Protestants’ scheme won’t allow such fruit, there is a fundamental problem.

How can non-essentials divide?

If Baptism and Holy Communion are really not that important, why do they divide the denominations? But these “non-essentials” are exactly what divide. If the Sacraments are non-essential, how is it they are the very things that separate the denominations? Insert any other distinguishing feature of a tradition; the same questions and rationale lead to the same place. The scandal of division is not diminished by calling differences “non-essential”. Indeed, calling disagreements “non-essential” only amplifies the problem. It is an admission of one’s willingness to separate and divide over mere non-essentials. It makes no sense.

Who, at the Last Supper, would have dared stand up, before taking the cup, to protest: “Lord, thank you for raising this subject of Body and Blood again; we wanted to point out that Your Bread of Life discourse (in John 6) might be misunderstood as soon as the last of the Apostles dies, so please use words a little more spiritual-sounding. Not so much flesh and blood talk, please. And, You understand, this whole business will go into the ‘non-essential’ category in about fifteen centuries.” Or, which of us, on the outskirts of Bethany and about to witness the Ascension of our Lord, would protest: “Excuse me Lord, but as we go forth to obey this Your last command, making disciples and baptizing in the name of the Father and of the Son and of the Holy Spirit, You do agree, don’t You Lord, that we are merely dealing with another one of those ‘non-essential’ doctrines, right? . . . Lord?”

I found the Protestant scheme devoid of Biblical authority so as to be fundamentally flawed. The Protestants’ battle cry of Sola Scriptura (an issue for another post) only highlights the problem. The whole scheme works exactly counter to our Lord’s High Priestly prayer of John 17. When we disagree over Scriptural interpretations, each convinced his own interpretation to be the faithful one, aren’t we essentially obligated to separate, in order to preserve “the truth”? The program is patently unworkable on its face.

And who says unity is a non-essential? Of all the Thou Shalt Not’s I’ve heard over the years, I don’t remember hearing a single sermon on the sin of schism and disunity. Who among us would have stood after the Amen of that High Priestly prayer in John 17 to protest: “Lord, thou dost pray to the Father about non-essentials; unity, Lord, as we all know, is certainly nice but entirely unworkable. You are asking a bit much. This is the real world. Plus, You are so keen on truth; therefore, we must preserve it by division.  With that understanding, Amen.”

Jesus did not reply to John’s disciples with some tightly-wound, rigid exegesis of Isaiah. John knew what Isaiah wrote. Our Lord knows our need for objective proofs (see John 20:7). He gives John objective proofs to lay against the words of Sacred Scripture. “Go and tell John what you see: the blind re-gain their sight, the lame walk, lepers are cleansed, the deaf hear, the dead are raised, and the poor have the good news proclaimed to them.” (Mat. 11:4-5). By God’s grace, the truths of Sacred Scripture, along with objective, historical evidence and rational explanations, made clear to me the veracity of the claims of the Catholic Church. The Lord knows what we need. 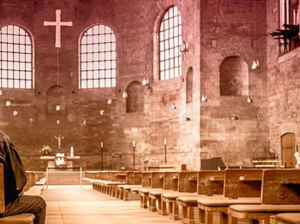 How I got from the fog into the light, we have not yet covered. It is enough here to demonstrate the quagmire of a real problem. I can testify there is a way out. Later, I hope to provide a link between the questions and the answer. Until then, remember when Jesus says “me”, He refers not only to Himself but also to His Church. “And blessed is the one who takes no offense at me.” (Mat. 11:6)

Go to Lord, have mercy on unjust judges. Like me. 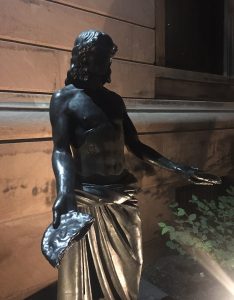 *All Scripture comes from the New American Bible, Revised Edition.

4 thoughts on “Any church but Rome, right?”